When Sex Hurts: A Woman’s Guide to Banishing Sexual Pain is a medically informed self-help book directed at women who suffer severe and long term pain during sex, as well as general genital pain during contact with afflicted areas. Drawing from both a medical and psychological framework, the book breaks down the many reasons a person might be experiencing such pain. It makes clear that pain during sex is exceedingly common and often not well-understood or diagnosed, even by professionals. It also emphasizes that sex does not need to be painful, which is on its own a powerful notion for those who have always experienced such symptoms. Especially of note here is that the book is designed for women without any medical or psychological background, and a significant portion of what is covered is aimed at teaching, alleviating fears and insecurities, and helping readers develop comfort with their bodies. Primarily focusing on the medical and physical spectrum of the various potential and common causes of pain, the psychological influence of trauma, insecurity, intentions, communication, and comfort with sexual partners are present here but are not as emphasized narratively. For those therapists who wish to expand their own knowledge of the phenomenon, the book will bring them up to speed on the newest medical and psychological considerations in diagnosis and treatment.

When Sex Hurts is structured in three parts, essential background information, the root of the problem, and when pain is gone, each reflecting the healing process as part of a continuum. Readers first get an overview of the problem, the commonality of it, what forms it might take, and reasons it might be there. The book then moves on to discuss pain more generally and how to think about it medically and personally. The third chapter covers how best to address pain and symptoms you may have with your doctor, what terminology you should know, and explains that seeing different doctors might be necessary if what’s occurring isn’t being addressed effectively. The following chapter discusses how to contain damage to your relationship, with different avenues of communication and understanding discussed, as well as how to maintain a healthy romance in spite of pain. The next several chapters discuss the various specific causes of sexual pain, which comprises the majority of the book’s contents. Disorders, infections, the effects of childbirth, pelvic and nerve pain, and psychological influences among other things are covered here. It is all very detail-oriented in a way that is easy to digest for average readers. The final part of the book discusses how to pick up the pieces of your life once the pain is alleviated, and deals largely with interpersonal relationships, prognoses, and how to adjust into a truly fulfilling sex life.

Because it is such a pervasive factor in the lives of many women, it is highly likely that having an understanding of the problem of sexual pain will be useful for therapists and their clients. Because this is an issue that might come up in therapy, the problem warrants greater understanding so that informed guidance can be given. The portion of the book dedicated to the potential psychological roots of sexual pain are, admittedly, lacking in comparison to the far more expansive sections on medical and biological problems. In part, this is due to the authors being medical doctors, and also due to sexual pain having been inappropriately considered a primarily psychological problem for the last several decades. This is something the authors make clear does more harm than good and allows avoidance of effective steps towards symptom improvement. Ultimately, the book is significant because of the good that it can do for those women who experience this kind of pain and are not getting informed or proper advice on how to think about and address it. What that might entail informatively for professionals depends on their practice, and individual therapeutic considerations.

Andrew Golstein, MD, is the president of the International Society for Study of Women’s Sexual Health. Caroline Pukall, PhD., is a leading researcher of female sexual pain and dysfunction, and works as an associate professor at Queen’s University. Irwin Goldstein, MD, has performed patient care and research for sexual dysfunction for thirty years. All three also co-authored the influential textbook Female Sexual Pain Disorders, considered groundbreaking work on the topic.

Recollections of Sexual Abuse: Treatment Principles and Guidelines is a widely encompassing diagnostic manual for practicing clinicians to assist, frame, and guide in the treatment of sexual abuse recollection. The book first covers the past and contemporary (as of 1999) historical context of sexual abuse that is remembered after the fact. From there, it details relevant knowledge pertaining to recollected sexual abuse and outlines that information for application in the clinical setting. It establishes a practical and theoretical framework for clinicians to work through and places it along a continuum of tailored treatment. Extensive research is cited throughout the book as well, and from a research perspective it can be extremely useful as a tool for guiding future or current research. A multifaceted approach, it is designed so that even those without any background in treating this particular kind of disorder will, by the end of the book, have an intricate knowledge of recollected sexual abuse and how it differs dynamically from her forms of affect, recollections, and abuse clinically. For those who already have some knowledge of the topic but wish to further expand what they know and can use in treatment, the book is equally invaluable.

Recollections of Sexual Abuse seeks to outline what is currently known about recollections of sexual abuse, how to consider it clinically, and how to treat it. All of this is done through a strict scientific and research foundation. The book first frames how the phenomenon has been handled in the past within the psychological community and details the adverse ramifications mishandling it had for how sexual abuse and clinical treatment were approached on a macro scale. It then frames the present context and the controversies behind false memories. After the socio-historical portion of the book, the structure of the rest of the book becomes topical. It explores trauma and memory interactions, child sexual abuse and memory, the philosophy and principles of practice and the evolving standards of care, and the evolving consensus model of post-trauma treatment focused on symptom relief and functioning. After this, the book centers largely on clinical guidelines. It covers guidelines for risk management, for assessment and diagnosis, for working with memory issues, and explains countertransference issues and a treatment decision model within a framework for different clinical memory scenarios. The book closes with extensive appendices and references that comprises a quarter of the book’s total content.

Essentially an expansive textbook for explaining the clinical intervention and consideration of sufferers of sexual abuse recollection, Recollections of Sexual Abuse contains a wealth of information for professional clinicians of all levels of experience in the topic. Detailed, conscious, and considered in its means of framing clinical scenarios and underlying goals in treatment, the book could be considered required reading for those working with patients who have reported experiencing recollected sexual abuse. Strictly clinical and very dense, it can serve as a jumping off point for the treatment process and for those looking to expand their expertise in treating traumatic experiences either real or imagined.

Christine Courtois, PhD, is a psychologist in private practice and serves as clinical director of The CENTER: Post-Traumatic Disorders program in the Psychiatric Institute of Washington. She conducts national and international workshops on the treatment of incest and of forms of sexual abuse and trauma. She has also authored Healing the Incest Wound: Adult Survivors in Therapy and Adult Survivors of Child Sexual Abuse. Appointed a member of several APA investigate groups studying child abuse and family violence, she was also the recipient of the APA award for distinguished professional contributions to applied psychology as a professional practice in 1996. 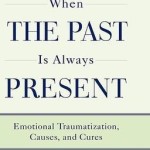 Ronald A. Ruden offers biological explanations and therapeutic techniques for the treatment of traumatization in When the Past is Always Present. He expounds at length on the biological mechanisms that occur during the process of trauma encoding, and later offers techniques to reverse the trauma and consequently bring balance to the brain and emotions. This book is intended for therapists, as well as those suffering from trauma and looking to self-administer helpful, healing techniques.

Ruden proposes “Havening” as a method to treat traumatization through the utilization of human touch and the re-exposure of a traumatically encoded emotion (95). This combination can help alleviate the trauma as it exists as an imbalance in the brain. Ruden explains the biological process of the reversal of the traumatization in Chapter Eight. Chapter Eight also includes a helpful guide to Havening, which could be easily applied by a therapist (109). However, if one is reading the book in the hopes of “Self-Havening”, Ruden has supplied a guide that does not require the assistance of another individual (113). These tools could prove very useful for an individual struggling with a traumatizing event.

Ruden fills the remainder of the book with anecdotal examples of trauma, along with several appendices intended to guide therapists though their use of psychosensory trauma techniques. Ruden’s appendices offer suggestions for therapists, along with circumstantial specifics relative to differing issues a therapist may be working with.

When the Past is Always Present offers an extensive amount of information on the causation and manifestation of trauma. Ruden has created a technical guide to understanding the mechanisms of trauma, along with a manual of psychosensory techniques. Through his many examples and step-by step instructions, one can feasibly perform psychosensory techniques on his/her patients, as well as self-administered havening techniques. Ruden’s text could also prove useful as a resource for students looking for a comprehensive explanation of the biological mechanisms that accompany an encoded trauma, as well as a window into possible trauma treatments.